Hitler and The Lives of a Bengal Lancer 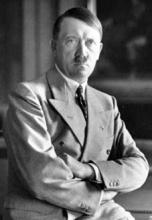 Adolf Hitler told British Foreign Secretary Lord Halifax in 1937 that "one of his favourite films was The Lives of a Bengal Lancer, which he saw three times. He liked this film because it depicted a handful of Britons holding a continent in thrall. That was how a superior race must behave and the film was a compulsory viewing for the S.S."

Directed by Henry Hathaway, The Lives of a Bengal Lancer was released in 1935 and starred Gary Cooper. The plot involves the 41st Bengal Lancers who are stationed in the Northwest Frontier Province (in British India) guarding it against the Afridi invaders led by a wily Mohammed Khan. The movie's tagline read:

The film was a huge success and was nominated for seven Oscars winning two of them. In 1939, a Cecil B. DeMille radio adaptation of this film was broadcast starring Errol Flynn among others. The film was also spoofed in the Laurel & Hardy film, Bonnie Scotland, where Stan and Ollie mistakenly enlist in the army and are posted to India.

The screenplay is very loosely based on the award-winning autobiography of a British army officer named Francis Yeats-Brown.