India and the diamond trade 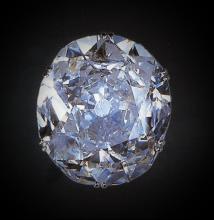 India's ancient reputation as being a land of untold riches stems partly from the fact that she was the only major source of diamonds in the world before the late 18th century. While minor pockets also existed in the far east, until relatively recently, every diamond that passed through human hands had its origins in the subcontinent, usually in the alluvial plains of the South Indian river system.

It is estimated that the gemstone has been known in these parts since at least 4000 BCE. One of the earliest historical references of diamonds - or vajra in Sanskrit - is in Chanakya's Arthashashtra wherein he talks about the diamond trade from an administrative point of view. Varahamihira's 6th century encyclopaedia, Brihat Samhita, included comprehensive information on diamonds (and other gem stones) including methods of identifying and categorising the stones based on their colour and other properties.

Many of the legendary diamonds which have adorned the crowns & swords of just about every noble in the world were mined in India. Most of them originated in (the region of) the kingdom of Golkonda (or Golconda) - the El Dorado of yesteryear - and were hence labelled Golconda diamonds. These include:

As is evident, none of the the above diamonds remain here.

The Indian mining industry is now a faint shadow of its past. However, it is estimated that 92% of all diamonds in the world are cut and polished in India, primarily in Surat.

The city of Antwerp in Belgium is considered the diamond centre of the modern world as it is where the vast majority of diamonds - rough or polished - are traded. Until recently, the diamond industry in this city was dominated by a community of Hasidic Jews. However, in the last few decades a number of Indian businesses - or diamantaires in the local lingo - have gathered a majority share in the market and have also expanded their influence into the other significant diamond bourses of the world. Most of these businesses are controlled by Gujarati Jains primarily hailing from the village of Palanpur.

How did the ordinary-sounding Satti Chaura Ghat get its present name?

A Norange hypocrisy: Did you know that the fruit and the colour have their roots in our humble corner of the world?

Do you remember the time when Gandhi passed an order stating that all goats were to be freed?

Be it cosmetic or reconstructive, the roots of plastic surgery can be traced all the way back to Vedic India