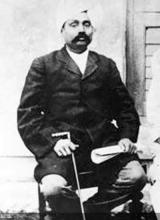 British India had quite a number of banks by the late 1800s. However, as one would expect, they were British-centric institutions which rarely included any Indians on their boards. The story goes that a Rai Mool Raj of the Arya Samaj mooted the idea of setting up an entirely Indian national bank. Lala Lajpat Rai took the proposal to its next step by contacting his friends stating that an Indian national bank would be "the first special step in constructive Swadeshi".

The result of his endeavours was the Punjab National Bank, an institution expressly founded by Indians to further the needs of India. The bank opened its doors in Lahore on 12 April, 1895. The founders included Sikhs, Parsis, and Hindus, making PNB a truly representative national bank.

The first account at the bank was opened by Lala Lajpat Rai. Other leaders too preferred to use Punjab National Bank. These included M.K. Gandhi, Jawaharlal Nehru, members of the Jalianwala Bagh Committee, Lal Bahadur Shastri, and Indira Gandhi.