Radhanath Sikdar & the case of the two wrong feet 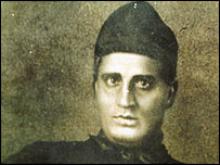 Radhanath Sikdar, born in 1813, was a Bengali mathematician who worked for the Surveyor General of India and was one of many thousands of Indians who were employed in the 19th century as part of the Great Trigonometric Survey of India. As a precocious 19 year old with a particular talent for spherical trigonometry, he was recommended to the then Surveyor General, George Everest, by his mathematics professor at the Hindu College (now Presidency) in Calcutta. Everest was so impressed with his new computor's performance that he refused to let him transfer out of his department.

In 1852, SIkdar was stationed at the survey's headquarters at Dehradun where he was tasked with calculating (and verifying) the heights of various peaks in the Himalayas. Everest had retired in 1843 and he was now serving under Andrew Waugh, a student of Everest. At this point in modern history, it was Kanchenjunga which was considered to be the highest peak in the world. While initial readings taken in 1849 by James Nicolson estimated that there might be a higher peak, Peak XV, beyond Kanchenjunga, the study had to be curtailed due to Nicolson having contracted Malaria.

Sikdar, built upon these readings from his location more than 800 km away paying particular attention to Peak XV. The story goes that upon arriving at a definitive calculation of the height of the distant summit, he burst into Waugh's office and exclaimed, "Sir, I have discovered the highest mountain in the world!". A few years later, Waugh announced the news to the world and named Peak XV (in honour of his predecessor), Mount Everest.

While Sikdar's calculations placed the height at exactly 29000 ft, he feared that the roundness of the figure would lead to the conclusion that it was more of an estimate than an accurate number. Consequently, he added two arbitrary feet to it to arrive at a final figure of 29002 ft. This number was the official height ascribed to Mount Everest until 1955.