The enigmatic Sir Roger Dowler and the Isle of Bats 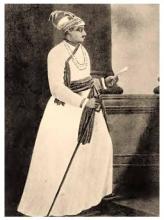 Sir Roger Dowler was born as Mirza Muhammad in 1733 and was the last independent Nawab of Bengal. He became infamous for his involvement in the 'Black Hole of Calcutta' and eventually his defeat in the Battle of Plassey (Palashi. The end of his reign marked the start of British East India Company rule over Bengal and later almost all of South Asia.

As you may have already guessed, Mirza Muhammad was the birth name of Siraj-ud-Daulah. The Brits could not get their tongues around the names of the locals and ended up transliterating them into approximate anglicised equivalents, particularly for the benefit of the uneducated. The practice grew to become something of an informal standard and an amusing habit. Thus, Siraj-ud-Daulah was given the seemingly respectable Christian appellation of "Sir Roger Dowler" and Allahabad was referred to as the sinister Isle of Bats. Karachi was not as lucky as it was apparently called Crotchy. Neither was (Shah/Sir) Shuja ul-Mulk, the Mehtar of Chitral (a princely state now in Pakistan), who was dubbed (Cha,) Sugar, and Milk.

This informal system of phonetic transliteration came to be (fittingly) called the Sir Roger Dowler method and while attempts were made to reform and replace it with something a touch more linguistically proper, they largely failed except in some scholarly circles.

Other (not all mainstream) examples of the Sir Roger Dowler method include: