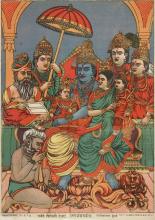 The Dasaratha Jataka is story number 461 of the Jataka Tales. It relates the story of King Dasaratha of Benares, his sons, Rama and Lakkhana, their sister, Sita, and half-brother, Bharata. There is no Shatrughna. The tale starts off on relatively familiar footing with Rama and Lakkhana packed off forest-side and Sita accompanying them as another dutiful sibling. It however, does not proceed to take on the epic proportions that the Valmiki version does. There is no kidnapping and therefore no Ravana, Hanuman, et al.

The Dasaratha Jataka (as with the other Jatakas) is more of a parable which focuses on handling grief, in this case, due to the loss of a father. When Dasaratha dies prematurely (thanks to an astrological prediction gone bad), Bharata comes to the forest to inform his siblings of their father's passing. Unlike his brothers and sister, Rama absorbs the news calmly. On being asked how he was able to not be overwhelmed with grief, he then instructs them on the "impermanence of things" and such.

The narrative then returns to familiar ground with Bharata ruling Ayodhya under the guidance of Rama's sandals until the term of exile ends. Rama has his triumphant return and proceeds to marry his sister, Sita.