Himmler and the Bhagavad Gita 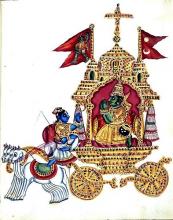 The Bhagavad Gita and the Vedas—especially the Rig Veda—were works that Heinrich Himmler, Hitler's trusted lieutenant, was intimate with and were used by him to justify the genocide of the untermenschen, the subhuman races. Himmler was the head of the SS and the man in charge of the Nazi concentration camps. He is widely held responsible for the Holocaust, the "Final Solution". Some sources claim that Himmler always carried a copy of the Bhagavad Gita with him and read passages from it every night. He called the book his "high Aryan canto" and regularly quoted excerpts from it. He espoused the Vedic caste system and believed that his SS were like the Kshatriyas, warriors who were empowered to kill for a higher purpose. He particularly referred to conversations between Krishna and Arjuna at Kurukshetra where the latter questions the rightness of war and violence and Krishna explains that it would actually be a sin not to fight in the battle as he would not be respecting his own dharmic duty. In speeches to the SS, Himmler drew a parallel between Hitler and Krishna and possibly identified with Arjuna himself.

What relationship does a "Savitri Devi Mukherji" have with Nazism?

Why did India suddenly become fascinated with a Robert Frost poem in 1964?

Did you know that Lokmanya Tilak believed that the original home of Aryans was the North Pole?

What tenuous connection does this Austrian professor of economics have with the Indian freedom movement?