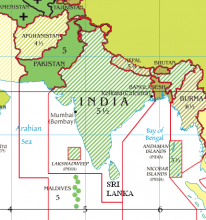 Indian Standard Time (IST) is the time observed throughout India and is calculated based on the 82.5° E longitude. This meridian passes through an approximate geographical centre of the country and has an offset of 05:30 hours with respect to UTC/GMT. While the city of Allahabad, Uttar Pradesh is the one that is customarily associated with this longitude, the nearby town of Mirzapur is officially considered the closest.

While India has just the one today, British India maintained four different time zones at one point in time or the other:

In 1802, John Goldingham, the official astronomer of the Madras Observatory, established the local time to be GMT +05:30 based on the longitudinal position of the city. Madras Time eventually grew to represent "Indian Mean Time", an unofficial standard, and later on was chosen as "Railway Time" to coordinate railway timetables throughout the country. Other areas of the country initially followed their own local time. In 1884, during the International Meridian Conference held in Washington, D.C., the country was divided into two distinct time zones at Bombay and Calcutta.

It was not until January 1, 1906, that IST was officially established at the 82.5° E longitude with an offset of GMT +05:30. Nevertheless, the other time zones continued to be used for many more years. The unification of all time zones to form a single national standard did not occur until after independence.

Proposals are regularly put forward to reintroduce multiple time zones in India. With the country covering about 30° in longitude, a practical time difference of two hours exists between the eastern and western tips. This has been deemed too wide a gap as eastern states start and end their days about an hour later than necessary, thereby unnecessarily consuming extra power at night. The other solution presented usually involves recalibrating IST to UTC +06:00.