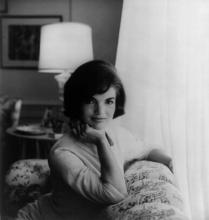 JK Galbraith, the noted economist served as the United States Ambassador to India between 1961 and 1963. He was a close confidante of the Kennedys and, in 1962, invited the First Lady of the United States, Jacqueline Kennedy, to tour India and Pakistan. She arrived in mid March along with her sister, Lee Radziwill, and visited Delhi, Agra, Varanasi, Jaipur & Udaipur.

After spending a few days in India, Mrs. Kennedy left for Pakistan. As a farewell gift, Air India presented her with twin six month old tiger cubs named Mohan and Mohini which were born in captivity in the Lucknow Zoo. Unfortunately, both of them died of acute gastroenteritis within a couple of days, reportedly because they were fed the wrong kind of meat.

A few days later, the Pakistani president presented her - a keen equestrienne - with a horse named Sardar which fared much better.

During her trip, Jackie Kennedy acquainted herself with both Jawaharlal Nehru & Indira Gandhi. In an interview conducted in 1964 - after her husband's assassination - she referred to Indira as "a real prune - bitter, kind of pushy, horrible woman".

Why did India suddenly become fascinated with a Robert Frost poem in 1964?

Who used the Gita to justify systematic genocide?

What links the American pop band Hanson and the Nehru-Gandhi family?

India has had its own crises lasting "Thirteen Days". Not just once, but thrice.

Which movie, set in India, was Hitler's favourite?

What relationship does a "Savitri Devi Mukherji" have with Nazism?