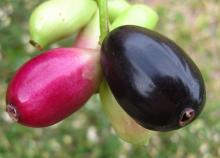 According to the puranas, the universe (Bhumandala) resembles a lotus and is made of seven concentric island continents (or planets) each twice as large as the preceding one. They are named Jambudvipa, Plakshadvipa, Salmalidvipa, Kushadvipa, Kraunchadvipa, Shakadvipa, and Pushkaradvipa respectively.

We live on the innermost island, Jambudvipa, i.e., the island of jamuns. The centre of the island is dominated by a mountain named Sumeru (or simply Meru) atop which is Brahmapuri. Each island has its own mountain and ruler and is surrounded by an ocean. Jambudvipa is surrounded by a salt water ocean. The others are, going outwards, surrounded by oceans of sugarcane juice, liquor, ghee, milk, curd, and water respectively.