Lal Bihari "Mritak" and the Association of Dead People 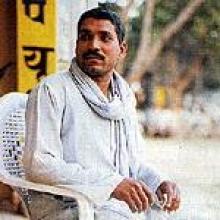 In 2003, Lal Bihari, a farmer from Uttar Pradesh, was awarded the Ig Nobel Prize for Peace for a triple accomplishment:

His story however, has its beginnings three decades earlier. In 1976, when a teen-aged Bihari approached a bank in Azamgarh to apply for a loan, he was informed that he was ineligible due to the fact that he was officially dead. Upon further investigation he came to find out that his next of kin, an uncle (and his sons), had bribed a government official (for ~Rs. 1200) and had had him declared deceased thereby inheriting Bihari's share of the family's ancestral land holdings. This was apparently an effective ruse thanks to the quagmire that is the Indian bureaucracy, as the victim - often illiterate poor, too young, too old or otherwise impaired - would find it nigh on impossible to resurrect his/her identity from the rolls of the dead.

Young Lal Bihari's predicament followed expected lines. All his importunate protestations and appeals failed to move the police and other bureaucrats, and his uncle and his family took over his share of the land. Lawyers, when contacted, informed him that his case was not all that unusual in Uttar Pradesh and that even if he fought to reclaim his identity and land, it would take a very long time. Although disheartened, Bihari came to the novel conclusion that the only way to hasten proceedings was to draw attention to his case and to get his name on public record. Over the years, his various attempts included:

Each of these attempts while unsuccessful, did make him infamous enough that other citizens sharing a similar fate began to get in touch with him. This eventually led to the creation of the Uttar Pradesh Mritak Sangh, an association of dead people, who banded together in a fight to reclaim their lives.

It was only in 1994, 18 years after being declared dead, that the Azamgarh district magistrate, a Hausla Prasad Verma, declared Lal Bihari finally alive once again and also returned his land to him. However, in a curious gesture of magnanimity, he let his uncle and his sons continue farming on his land - their guilt alone provide him with sufficient satisfaction.