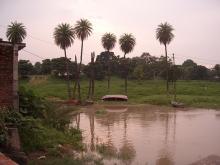 The Massacre Ghat is located on the banks of the river Ganga in the heart of the city of Kanpur. While it used to be known as the Satti Chaura Ghat and its official name is currently said to be Nana Rao Ghat, it is commonly referred to by its macabre byname thanks to events during the 1857 revolt. Satti Chaura Ghat was, in 1857, a popular boarding point for the river route between Kanpur and Allahabad.

During the Siege of Cawnpore, Nana Sahib had negotiated a surrender from the 300 or so strong contingent of British soldiers and their families in exchange for their safe passage to Allahabad. On the morning of June 27, a large British column led by General Wheeler (and escorted by literally the entire rebelling sepoy army) made their way to the Ghat where Nana Sahib had arranged 40 boats for their journey. With summer at its peak, the Ganga was dry, sluggish and plagued by mud-banks which made navigation difficult. After much effort, the British boarded their boats and slowly began making their way up the river.

It is not known exactly what precipitated the fire-fight between the sepoys on the banks and the soldiers on the boats. But what is known is that a large number of the British were killed or captured. Whether this massacre was carried out under the orders of Nana Sahib (and his general, Tantya Tope) is still a subject of much discussion. Around 120 women and children were taken prisoner. They were however, among the victims of the Bibigarh massacre of July 15.

Once the British army regained control of Kanpur, the city saw more vindictive violence which resulted in a large number of deaths as well. Satti Chaura Ghat was nicknamed Massacre Ghat, a title that lives to this day.

What prompted this farmer from UP to form the Uttar Pradesh Mritak Sangh & led to him winning the 2003 Ig Nobel Prize for Peace?

Did you know that Lokmanya Tilak believed that the original home of Aryans was the North Pole?

What does this picturesque village in Himachal Pradesh have in common with a British engineer?

What is IST based on and when was it established?

At one point in time, every diamond in the world originated in India.