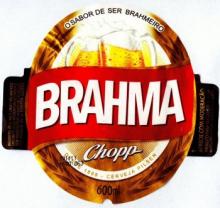 The second most popular beer in Brazil is named "Brahma". Brahma Beer was originally made by Companhia Cervejaria Brahma, a company formed in 1888 by Joseph Villager. It is now owned by the world's largest brewer, Anheuser-Busch InBev, which also owns other well-known brands such as Beck's, Budweiser and Stella Artois. At the moment, the company has an insignificant presence in India.

According to the Brahma Beer website, the origin of the beer's name is uncertain. But it goes on to suggest that, considering that the brew's creator - Joseph Villager - was a "deeply spiritual man", it is possible that he took the name from the "Hindu demi-god".

The company markets a number of brands all across Brazil, the rest of Latin America, North America and Europe. Its most popular brand in Brazil is named Brahma Chopp (pronounced like shoppe and meaning "draft") which is also the base for its globally popular lager, Brahma. Other brands include Brahma Beats, Brahma Choco and Extra Light Brahma.

Brahma Beer is also renowned for its innovative marketing advertisements.

Nanda Parbat? Rama Kushna? Batman? What in the world is going on?!

FYI, we all live on an island of jamuns.

Were you aware that the Jataka Tales also covers the Ramayana?

Who is this Indian American who acts, writes, produces and directs episodes of the American sitcom, The Office?