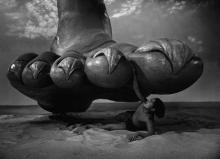 Born on 27 January, 1924 in the then state of Mysore, Sabu Dastagir was the son of a mahout. His father died when he was nine and young Sabu took over his responsibilities at the royal stables of the Maharaja of Mysore. When he was twelve, he was spotted at work by documentary film-maker, Robert Flaherty, who was looking for a lead for his new film, Elephant Boy (which was based on a story by Rudyard Kipling). Given his professional capabilities as well as his charming good looks, he was offered the part and a contract. After initial filming in India, he and his brother (who served as his guardian) travelled to England where he completed the picture.

Elephant Boy was a hit and Sabu - now a ward of the British Empire and receiving excellent schooling in England - was a bona fide star. His subsequent films were also highly successful and included Drums, Arabian Nights, and what is considered his most famous film, The Thief of Baghdad. Following his success in England, he was soon approached by Universal Pictures with a hefty contract, and moved to the United States. He became an American citizen in 1944 and also served meritoriously in World War II in the Air Force as a tail-gunner. At this point, he was one of the richest stars in Hollywood.

His career began to wane in the late 1940s and 1950s thanks to poor management as well as a change in prevailing tastes. He died prematurely of a heart attack in 1963 in California at the age of 39.

He married Broadway actress Marilyn Cooper and fathered two children, Paul and Jasmine. Paul is a a successful musician and record producer. Jasmine was an animal trainer in Hollywood.

The (ECW) wrestler, Sabu, is named after him.

Which Indian performed as a Deltan navigator in Star Trek?

How did V.S. Naipaul inadvertently help the James Bond franchise become what it is today?

What connects the town of Malegaon in Maharashtra with Superman and James Bond?

Which 1988 hit single and winner of three Grammy awards was inspired by this Indian spiritual guru?

Which movie, set in India, was Hitler's favourite?