The Gita and The Bomb 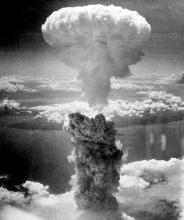 We knew the world would not be the same. A few people laughed, a few people cried. Most people were silent. I remembered the line from the Hindu scripture, the Bhagavad-Gita; Vishnu is trying to persuade the Prince that he should do his duty and, to impress him, takes on his multi-armed form and says, 'Now I am become Death, the destroyer of worlds.' I suppose we all thought that, one way or another.

These were the words of J. Robert Oppenheimer - a man widely considered to be the father of the atomic bomb - as he recalled the reactions of the scientists involved in the detonation of the first ever nuclear bomb on July 16, 1945. Hiroshima and Nagasaki were bombed a few weeks later.

Robert Oppenheimer was a Jewish-American scientist who headed the Manhattan Project, an R&D program tasked with creating the world's first atomic bomb. He took over the project in 1942 and oversaw the testing, production and deployment of humanity's first ever weapons of mass destruction. Prior to his appointment, he was a professor of Physics at the University of California at Berkeley. It was in there in 1933 when he became a student of Arthur W. Ryder, a Professor of Sanskrit and took an interest in the Bhagavad Gita which he read in the original language. He considered the Gita to be one of the most influential books to shape his philosophy of life.

The site for the first nuclear explosion on July 16, 1945 was curiously named Trinity. During the event, Oppenheimer recalled thinking of another verse from the Gita which translates thusly:

If the radiance of a thousand suns were to burst at once into the sky, that would be like the splendour of the mighty one ...

This quote also inspired the title of Robert Jungk's account of the development of the atomic bomb, Brighter than a Thousand Suns: A Personal History of the Atomic Scientists, which was published in 1958.